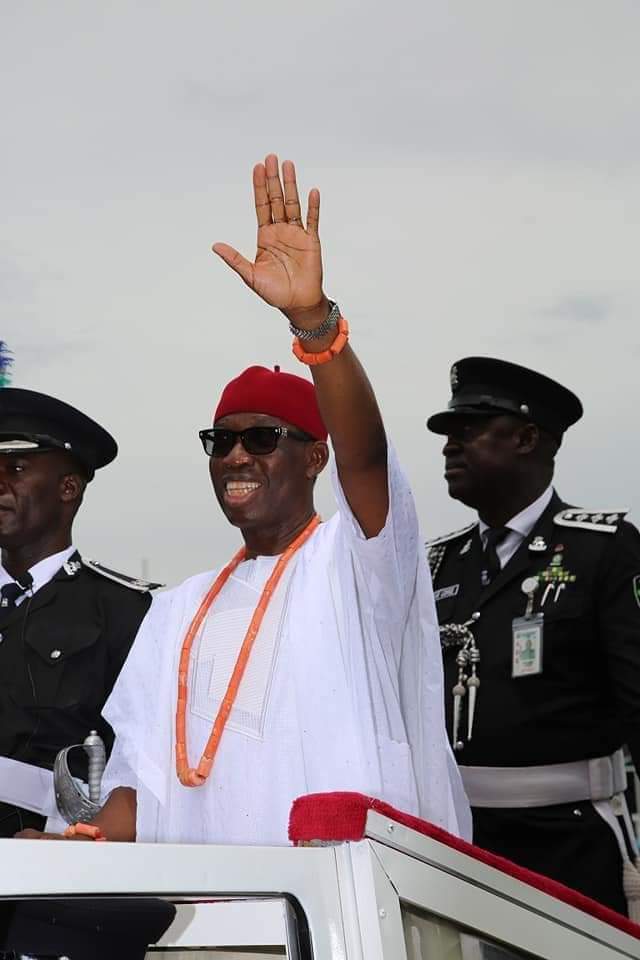 Supreme Court Verdict: Okowa calls on Ogboru to join hands with him in building Delta        Governor of Delta State, Senator (Dr.) Ifeanyi Okowa has called on his opponent, Chief Great Ogboru to put the bitterness of the election away and join hands with the state government in the task of building a new Delta, noting that you must not be in office to make impact.
The governor made the call on Wednesday evening at a thanksgiving service held at the Government House Chaplaincy, Asaba to celebrate the Supreme Court verdict, also enjoined Deltans to be more united following the re-affirmation of his victory at the polls by the Supreme Court which declared him as the duly elected Governor of Delta State.
“I want to thank Deltans for all your prayers and support and as we move forward, it is time to work for the good of the state; I cannot do it alone; as a government we require the cooperation of all; it is time for us to partner together; it is time to forget the bitterness.
“I will use this opportunity to call on my opponent, Chief Great Ogboru for him to realize that it is time for him to work together with the state government to build our state; I believe that truly everyone can make his contributions and impact whether he is in office or not as it is truly time for us to be united as it is in the best interest of the state to work together and continue to pray for God’s strength to move this state forward.
“God took us through the elections, through the tribunal, Appeal Court and now, the Supreme Court and in each of the victories, we have always returned thanks to God because He alone has made it possible; we trusted in God and He has seen us through and today we have victory.
“This victory is dedicated to God because God willed it to be, to settle the state and  to ensure that there is peace; to bring oneness among us because without peace and without oneness we cannot move forward as a people.”
Governor Okowa who attended the thanksgiving with his wife, Dame Edith, his Deputy, Barr. Kingsley Otuaro and other top government functionaries said.
He used the occasion to speak on 2023 elections saying, “I know that 2023 is not so far but, it is also not too near, so, there is a time for everything and now, it is truly time as a government to work for the people; when the time to play politics comes we will play politics.”
“For those of us in government, I want to plead that the best thing for us to do now is to work. There will be room to play the politics and by His grace when the time comes, everything will work out smoothly; no one can make a Governor; only God can decide who becomes Governor; so, now we have to work together to achieve a Stronger Delta as we need to spend the next few years working for the people of Delta State.”
Chaplain of Government House Chaplaincy, Venerable Charles Osemenem in his sermon, said, God works in miraculous ways, further asserting that, “many a time when you see results, you forget that there was a battle over which God gave you victory; we thank God because this victory is a sign of what He will do in Delta State.”
The Supreme Court had earlier today, reaffirmed the March 9, 2019, election victory of Delta State Governor, Senator (Dr) Ifeanyi Okowa.
In a unanimous judgment delivered by Justice Centus Nweze, the court held that the appellant, Mr Great Ogboru of All Progressives Congress (APC) failed to prove his allegations of over-voting at the polls.
The judgement which was concurred to by six other justices of the court, held that the appeal lacked merit and that the court was putting a final nail on the appealant’s forensic Golgotha.
Nweze said that the appeal was a waste of the precious time of the apex court.
He noted that majority of the documents tendered by the appellants were based on hearsay, adding that the petition was a sheer waste of the genuine time of the court.
“There are plethora of decisions of this court on the position of card readers and they are too numerous to begin to mention them or for the appellant to claim they are not in the know.
“The appeal was against the valid election of Governor Okowa and it is hereby dismissed for lack of merit,” he declared.