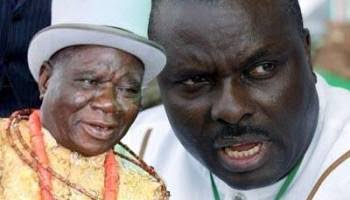 The myth on how the former governor of Delta State, Chief James Onanefe Ibori made Sen. Okowa, Governor of Delta State in 2014/15, has been shredded and thrown into the trash bin by the iconic elder statesman, Chief Edwin Kiagbodo Clark. Who described such assertion as nothing but mere fantasy and illusion existing only in the minds of the perpetrators of the absurd story.

Speaking during exclusive interactive section with Vanguard’s Emma Amanze, Chief Clark, said, “it is primitive, uncivilized, and incorrect to assert that Chief Ibori supported both David Edevbie and Dr Ifeanyi Okowa during the 2014 PDP primary at the same time, asking ‘how is that possible’? He added “it is only unenlightened people who would believe such stories”.

Before now, there were several Conspiracy theories on how Ibori made Okowa, Governor of Delta State in 2014/15. One of such conspiracy theory claimed that Ibori supported David Edevbie in the PDP primary, to deplete Rt. Hon Victor Ochei’s votes in Delta Central, thus paving the way for Sen Dr Okowa’s victory in the primary
The proponents of this bizarre theory claimed that Ochei was popular in Delta central and that without Edevbie in the race, Ochei would have cleared all the votes in the district and won the primary, but they failed to state what would have happened if Edevbie had won the primary.

Another conspiracy theory also claimed that Ibori instructed Amori to mobilize Delta central votes for Okowa during the primary after the Uvwiamuge declaration. This theory also suffered seriously set back because it was alleged that Uduaghan was under immense pressure from Ibori to replace Tony Obuh with Edevbie, hence four days to the PDP 2014 Delta State guber primary, Uduaghan relocated to Government House Annex, Warri, where he instructed UPU to submit list of Urhobo preferred aspirants to him to adopt one of them for the primary.

It was also believed that under same Ibori pressure, Uduaghan was forced to skip the first and second aspirants in the UPU list, to chose Edevbie who was third. (The aspirants submitted to Uduaghan by UPU in order of preference then, were, Omo-Agege, Gbagi and Edevbie). It was equally alleged that Uduaghan, working on the order of Ibori, arm twisted UPU to include Edevbie’s name in the list when he discovered that Edevbie did not make the initial final list.

From the above political maneuvering at the time, it becomes very wrong now for anyone to credit Ibori with Okowa’s victory in 2014/15 elections.

According to E. K Clark, it was after the Uvwiamuge declaration that Ijaw leaders decided to adopt the candidature of Sen Dr Ifeanyi Okowa for the PDP primary. He said, “the arrangement for Dr Ifeanyi Okowa to become PDP gubernatorial candidate in Delta State with Barr. Kingsley Burutu Utuaro (KBO) as his Deputy, was finally sealed in my house at a meeting attended by Dr Ifeanyi Okowa, Barr. Kingsley Otuaro, Senator James Manager, Government Ekpemupolo (Tompolo) and myself”..
Further he emphasized, “I am very confident and proud to repeat again that I contributed largely to Dr. Okowa becoming the Governor of Delta State”. Clark’s statements have not been refuted by anybody till the moment of writing this article.

No man should claim other persons glory. It was the Ijaws that paved the way for Okowa to became governor of Delta State in 2014/15. So, there is nothing sinister if Governor Okowa decides to back Ijaw for Delta State governor come 2023. One good turn deserves another. ‘You fall for me, I fall for you, na love play be dat’.