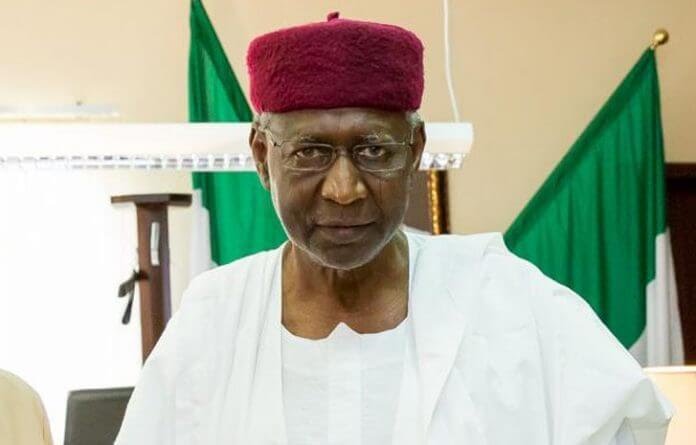 The Chief of Staff to the President, Mallam Abba Kyari, is dead.

The Senior Special Assistant to the President on Media and Publicity, Mr Garba Shehu, said the deceased died of COVID-19.

Announcing Kyari’s death via his verified Twitter handle, @GarShehu, Shehu wrote, “The Presidency regrets to announce the passage of the Chief of Staff to the President, Mallam Abba Kyari.

“The deceased had tested positive to the ravaging COVID-19, and had been receiving treatment. But he died on Friday, April 17, 2020.”

Shehu said funeral arrangements for the deceased would be announced soon.

The Special Adviser to the President on Media and Publicity, Mr Femi Adesina, also wrote via his verified Twitter handle @FemAdesina, “Chief of Staff to the President, Mallam Abba Kyari, passes on. May God rest his soul. Amen. Funeral arrangements to be announced soon.”

Kyari had tested positive for the coronavirus in March after a trip to Germany and Egypt.

Doctors attending to the late Chief of Staff had obtained his medical records from Wellington Hospital, St John’s Wood, London, which showed that he (Kyari) had some other ailments that could hamper his rate of recovery from COVID-19.

The Wellington Hospital, which is located in North London, is the largest independent hospital in the United Kingdom.

Kyari, in a letter on March 29, had said he was conveyed to Lagos on an air ambulance to do additional tests and observation, adding that he took the decision based on medical advice as a precautionary measure.

He further stated that he made his personal care arrangements to avoid further burdening the public health system, which faces so much pressure.

However, the Minister of Health, Dr Osagie Ehanire, refused to disclose where Kyari was receiving treatment.

The Commissioner for Health in Lagos State, Prof. Akin Abayomi, later said he did not know Kyari’s location thereby sparking reports that the President’s aide was not in any isolation centre.

Responding to a question during a recent Presidential task force briefing in Abuja, the health minister said Kyari’s location was not important, adding that the President’s chief of staff had a right to privacy.

Reacting to the news, the National Chairman of the Peoples Democratic Party, Prince Uche Secondus, described the death as shocking.

He said he had prayed for the recovery of the late chief of staff, adding that he was shocked to hear about his death.

He said, “This is shocking. I’m sad to hear this bad news. Why now? I wish to console with the President, members of his cabinet, the family members of Kyari and all his associates.

“The death is a reminder to all of us that whatever we are today, it is by the grace of God. He is the one that owns us and can call us at home at anytime. Once more, I pray for the repose of the soul of the distinguished Nigerian.”