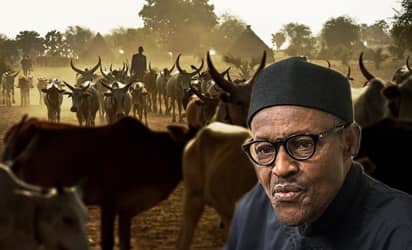 DAILY POST had reported that Mrs Funke Olakunrin, daughter of Ruben Fasoranti, was killed by gunmen suspected to be Fulani herdsmen on Thursday.

The report quoted an eyewitness as saying that the 58-year-old died of gunshot wounds.

According to the eyewitness, Olakunrin was shot by suspected Fulani herdsmen at Ore junction in Ondo State earlier on Friday.

But the Ondo state Police on Friday night said the hoodlums struck on the Benin-Sagamu Expressway.

The spokesperson of the Ondo State police command, Femi Joseph, told DAILY POST that some other passengers were kidnapped during the incident, which happened on Friday.

However, reacting, Buhari in a terse statement by his Special Adviser on (Media & Publicity) Femi Adesina on Twitter said, “President Muhammadu Buhari condoles with Afenifere leader, Pa Reuben Fasoranti, whose daughter, Mrs Funke Olakunrin was killed along Ondo-Ore road by those described as armed robbers by Ondo Police Command.

“He prays God to give Pa Fasoranti fortitude to bear the loss,” he added.