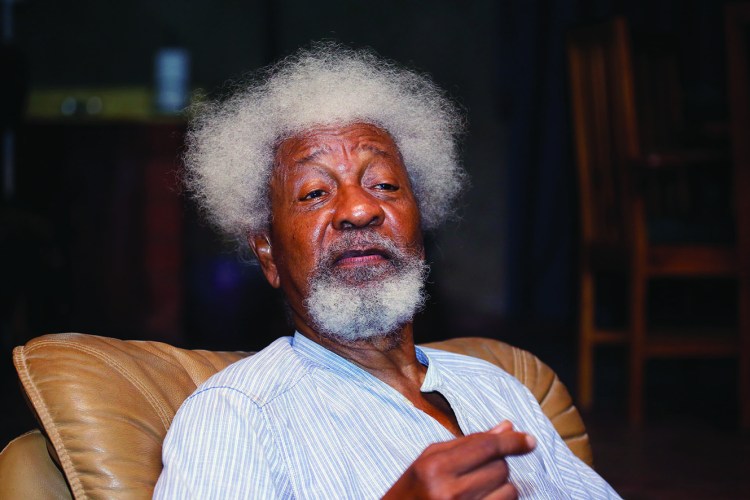 Nobel Laureate Professor Wole Soyinka has declared that the establishment of Operation Amotekun by Southwest governors ‘has come to stay irrespective of its legality’.

Soyinka said the supplementary security outfit launched in Ibadan last week, came up as a result of series of meetings by the leaders of the region to curb insecurity issues that the existing security bodies have not been able to put an end to.

The human rights advocate made this known at a press conference at his Kongi’s Harvest Art Gallery, Freedom Park, Lagos, opposing the Justice Minister and Attorney-general of the Federation, Abubakar Malami, who declared the security outfit illegal.

Soyinka who said he has always believed and passionate about self-policing noted since the federal government has failed in its fundamental duty to secure the lives and property of citizens, it cannot deny people who are ready to protect themselves.

The Nobel Laureate further considered Abubakar Malami’s statement inhuman and unpatriotic to say people do not have the right to flush out the evil ones among them which the exiting security outfits have not been able to do.

“This has been the result of the consciousness by the people of this region. These governors met, looked seriously at the menace, examined its antecedent, they’re elected representatives and they came up with this solution Amotekun”.

“Amotekun is a result of meetings to curb menace in the region,” he said.

” And now some people who have been sleeping all this time, taking belated actions in many directions, watched the citizens of this nation been decimated, villages been wiped out, farmers been chased off their lands, not merely in the north, but west and all the way down south to the east in Enugu. They are now coming and telling us that this initiative is illegal, unconstitutional.”

“I think they should go back to sleep, there may be criticism here and there, it is normal because of the fear that this might be misused but there are possibilities for correction but to come and say that people do not have a right to defend their lives, to secure means of livelihood, to flush out the evil elements among themselves, I am talking about ritual killers, kidnappers, armed robbers, 41niners, in other words, to pick up the slacks which exiting security units have been unable to fulfil.

“I consider this enemy’s action, unpatriotic inhuman. Mr Asemota will say one or two things about the legal contestation but I prefer to believe that the government itself has not spoken, I refuse to believe that any serious government which cares for its citizenry will raise an objection to this kind of initiative,” he said.

“But whether they raise it or not, Amotekun has come to stay,” he declared, adding that, “Amotekun is a creation of people about humanity, not about legalism.”

Soyinka, however, urged the southwest governors not to at crime prevention but they should also create social action and proactive initiative to end hunger in the region.

“Amotekun is only a part of the story, we all know the criminality that derives from many causes, among them are poverty, hunger, desperation, sense of alienation. So Amotekun should not be crime prevention or the only solution to insecurity, to criminality, there has to be also social actions, proactive initiatives for the amelioration of the impoverished condition of our people.”

“We should move from Amotekun to Arosikun, both should be complementary, in other words, we should start thinking in terms of how to feed our own people, we must think outside the normal parameters of productivity and distribution.”

“Hunger is real, poverty is real, it’s very much with us and it’s reaching a critical mass. So we should start thinking of soup kitchens as obtained in other parts of the world, involve the millionaires, billionaires among us to contribute to the coffers of our state governments to establish these temporary agencies of amelioration of the condition of our people.”

“I don’t want to use the expression of stomach infrastructure, that has a bad odour, for those who promoted it, we know whose stomachs they were looking after so I prefer just ‘Arosikun (food preparation) to end criminality once and for all in our community,” he added.