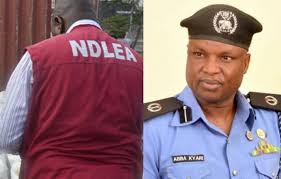 The disgraced ‘Super Cop’, Abba Kyari, is currently facing a probe over his alleged link with cyber criminal, Ramon Abbas, a.k.a Hushpuppi, and drug cartel.

According to the sources quoted by Vanguard NDLEA has filed an application in court for the extension of the detention of Abba Kyari and four other suspects involved in the 25-kilogramme cocaine deal.
This is just as sources said the Agency is also carrying out forensic analysis of the exhibits recovered from the suspect and other accomplices with a view to arresting all the suspects involved in the deal.

Furthermore, it was learned that the agency has beefed up security in and around their headquarters at Gambia, Area11, Garki, Abuja following fears that attempts may be made to free Abba Kyari and other police officers allegedly involved in the drug deal.

This development, according to sources, came as a result of privileged information made available to top officials of the agency that adequate care and security measures must be taken to ensure that Kyari and other outside forces do not spring the suspects from detention.