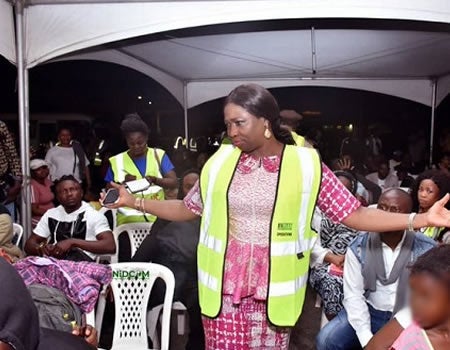 187 Nigerians who fled South Africa to get loan, SIM cards, N40,000 airtime, 9GB data — Dabiri-Erewa.         The Federal Government is determined to empower Nigerians who volunteered to return home from South Africa.
Chairman/CEO of the Nigerians in Diaspora Commission, Hon Abike Dabiri-Erewa, who led officials to receive the 187 Nigerian Returnees from south Africa revealed the government commitment.
In a statement released to newsmen by Hon Dabiri-Erewa media aide, Gabriel Odu, she revealed that the Federal government has opened discussions with the Bank of Industry for a soft loan to support those interested in small trade and businesses.
A programme of reintegration will also be put in place subsequently.”
According to Odu, officials of the Bank of Industry have since briefed about the returnees.
Apart from the soft loans, the 187 Nigerians evacuated would also receive SIM cards with N40,000 Naira worth of air time, plus 9GB of data valid for two months.
The Returnees arrived at about 9.35 pm on Wednesday, September 11, on-board an Air Peace flight.
Hon Dabiri-Erewa who commended the management of Air Peace for the kind gesture disclosed that amongst the 187 Nigerians evacuated were 30 children.
The statement added that “the Nigerian Returnees with joy and excitement at the reception they received on their return home, they all got up to render the National Anthem thanking President Buhari, the Chairman of AirPeace as well as the Consul General in South Africa and the High Commission in Pretoria for their efforts in ensuring a successful return home to Nigeria.”
The Chairman of Nigerians in Diaspora Commission urged other Nigerians in South South to remain peaceful and good Ambassadors as Federal Government is making firmer strategies for their safety and security in that country.
Checks revealed that arrangements for airlift of Second Batch of Nigerians from South Africa were underway.